I have a confession to make. I’m a softie. No matter how much I try to keep the lines between home and new business separate, it just doesn’t happen. If I have a single dog boarding for the night, and I know that dog will get along with my dogs, he spends the night at my house rather than sleeping all alone at the daycare. In the case of Gracee and Walter, I’m a goner. They have me wrapped around their little paws. But they really are a special case…

In May of this year, the Jefferson family suffered a tragedy. They had a house fire. Fortunately, no one was hurt. And as fate would have it, their daughter was unexpectedly home and this is what probably saved Walter and Gracee. Had no one been home, their fates may have been different. Following the fire, the kids spent a short time with neighbors, but ultimately ended up staying at the veterinary clinic boarding facility as the family put their life back together.

In early July, as Play All Day was just opening, I received a Facebook post from Michelle Jefferson, inquiring about our facility as a possible alternative for Walter and Gracee. Over the next weeks, we put things together, and on July 21, they came to stay at Play All Day. As it turns out, Gracee did not like confined spaces and was our first escapee in the hotel. This was when I knew that I needed to change my hotel suite doors to glass front doors (Thank you Gracee). So unfortunately, she had to be crated and Walter was free in the suite. While she was safe, this was still very stressful to Gracee and she would bark until she lost her voice. One can only imagine the stress that these kids had gone through and this behavior was not at all surprising. It was my husband Will’s idea to bring them up to the front office space to live. It made a great difference for them and Gracee’s stress level went down significantly. She loved to greet visitors by putting her paws up on the counter and wagging her tail.

During the first few weeks, both Walter and Gracee were excellent additions to our play groups. Walter even developed a fan following on Facebook. But as Walter got more comfortable, his “bully” nature came out and he had to be in timeout more than he was in play time. This is nothing bad about this; it is just the nature of the breed. They are very strong and stout, and often don’t know their own strength. And to top it off, we discovered that one of his hips might be bad, and all of the hard play was making him sore. So we decided that Walter was not a great candidate for play groups. We moved him back and forth between the front office and a crate in the play area so that he felt like a part of it all, but was safe. Gracee continued to be an excellent play mate and even helps some of the shyer dogs to come out of their shells a bit.

Two weeks ago, Michelle informed me that it may be another 8 – 12 weeks before their house is done. This is just too long for dogs to be living in a facility (no matter how nice it is), so I asked Michelle if she would be OK with Gracee and Walter moving in to our house. The change in Gracee is most noticeable. Her whole body posture is more relaxed and her eyes are shining. She is thriving in a home situation again. Walter surprised me. He seemed a bit stressed by the change. He really liked living in the office at the daycare. And he really did not know what to make of that strange cat that “owns” the house. I told him not to worry…most dogs are terrified of him. Now, two weeks later, he is his normal cute, obnoxious self that you can’t help but love.

So, this softie is now living in a household of 4 dogs and is always grateful to her understanding and compassionate husband. But I sleep well at night knowing that these two kiddos are living the best life they can until they get to go back home. I can’t wait to see Gracee’s face when this happens. 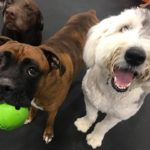 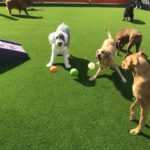 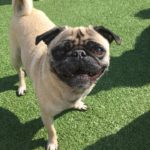